A COMPLETE MISS! - Dr. Slobodan Mitric (Karate Bob) On the Dutch Movie "2/11 - The Game of the Wolf" About the Murder of Theo van Gogh 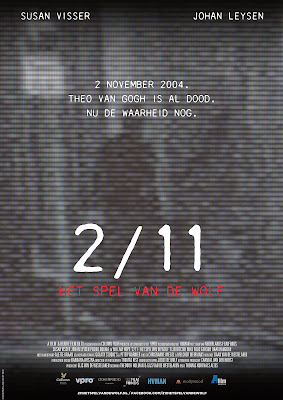 Beautiful film that shows how the Dutch Secret and Security Service AIVD works - but as a film shot to reveal the truth about the murder of Theo van Gogh, it completely misses its mark.

Interesting is a fragment where it is alleged that Mohammed Bouyeri was treasurer of the Hofstad Group [a group of radical Muslims based in The Hague].
This comment was meant to hide the fact that Muslims gave a massive amount of money to Mohammed. Because the British MI6 gave Mohammed Bouyeri money for the liquidation of Theo van Gogh and the bearded owner of the laundry mat on the Java Street [described in Ch. 13 of my book “Dead End Street“] was head of the special department of MI6 in Amsterdam.
The MOSSAD supplied the murder weapon. Ron [an informant for the AIVD appearing in the film] is a member of MOSSAD and for everything he does, he must have prior approval from the MOSSAD.
It is important that an independent prosecutor is put on this case and that he can prove that many Muslims in Amsterdam had given money to Mohammed Bouyeri to look after his remaining family members, because Mohammed Bouyeri had vowed that after the murder of Theo he would fire on the police so that they would kill him.
The director of the AIVD [Sysbrand van Hulst] ] I know personally.
A relative of Van Hulst is a tipster about 60 kg of stolen plutonium and a few tons of radioactive material about which [the then Dutch] Prime Minister Lubbers did business with me.
[Former Dutch Secretary of the Department of Justice and Security] Joris Demmink has long been blackmailed by Muslims - they have awkward videos of him and his children lovers.
Many former ministers as well as Prime Minister Balkenende knew that Theo would be killed.
The Imam – the Syrian- who is described in the film as the one who ordered the liquidation is not the Imam who really given that order. I met him once - he was with the two bodyguards of Mohamed Bouyeri on the Java Street during Muhammad’s ceremony [as described in Ch. 13, "Homage to the Prince of Death" of my true crime "Dead end - Why the Dutch Secret Service Murdered Its Top Secret Agent Theo van Gogh "soon to be published in English].

Note: The Dutch version of this review "Een complete misser" can be read here. while a film on YouTube of the reading (in Dutch) "Why Theo van Gogh Was Really Sacrificed" on November 2, 2014 near the monument "The Scream" dedicated to Van Gogh can be seen here.
Posted by Willehalm at 2:12 PM