Announcement "Orders from Higher Up"

Note: This is a translation from the Dutch announcement of the book dated February 24, 2012

Amsterdam, May 24, 2012 - The Dutch version of the true crime "Dead End Street - Why the Dutch Secret Service Murdered Their Top Secret Agent Theo van Gogh" by Slobodan Mitric, alias Karate Bob, was published by the Willehalm Institute Press in Amsterdam this spring and is available in bookstores and on the Internet. 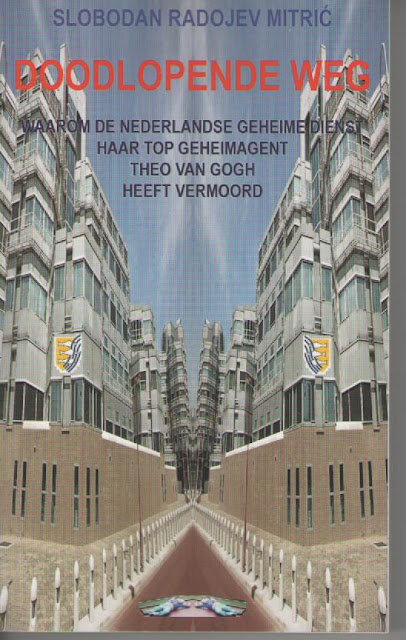 This book dedicated to Theo van Gogh is described by the writer as a literary crime-report, based as it is on personal observations and secretly recorded conversations and filmed scenes with directly or indirectly involved figures. It is, like his earlier books such as The Golden Tip - The Entanglement of the Upper and Underworld and the Murder of G. J. Heijn, Help! They’ve Kidnapped Me! Lady Di and 911: The Accusation - Bringing the Guilty to Justice in no way conspiracy theory, but conspiracy practice. Accordingly, the author as a former top counter-intelligence agent emphasizes that he can prove everything brought forward in this new true crime and if required can testify behind close doors. The most remarkable shocking and lugubrious events of his report are:

1. A few days before Mohammed Bouyeri, the "Chosen One" on the morning of November 2, 2004 shot down Theo van Gogh at the Linneausstraat opposite the district office of Amsterdam East and then cut his throat and pinned a letter on his chest with a knife, he was as the Prince of Death, donned in a long white Arab garb, honored in public on the flower-covered Java Street in Amsterdam East in the presence of his Imam, body guards and hundreds of spectators, including even officials of the police and the secret service. The writer actually witnessed this public ritual himself perchance and has described in the chapter "Homage to the Prince of Death".

2. As the final chapter reveals, this liquidation of Theo van Gogh was not, as is generally maintained and believed,  the sole action of an Islamic fundamentalist, but a covert operation prepared, carried out with military precision  and subsequently perfectly covered up (at least until now) by the Dutch secret service and their infiltrators in the national press and media.

3. This operation had probably not been necessary, if Theo had only listened and complied with two urgent requests and warnings from the Director of the AIVD (Duch Secret Service) to remove the article "Shadow Commando of the Prince" from his website "The Healthy Smoker". This article by Jan Portein as well as a supplement to it under the title "Lubbers and Muslim Bomb" - in which the writer Karate Bob in his at that time secret function as director of World Atomic Counter-Espionage (WACE) plays the central role in a secret multi-million plutonium transaction - were according to the Dutch Secret Service (AIVD) a threat to national security and the Queen. The literary representation of the two conversations between Theo van Gogh as a member of the secret service and the head of the AIVD in Cafe Cinetone on the Duivendrechtsekade and Cafe Danzig in the center of Amsterdam can be read in the chapters "Shadow Commando of the Prince" and "DNA". The two relevant articles that Theo refused to remove from his website are found in the appendices, which include legal documents related to the threatening, illegal and inhumane eviction of the ailing writer by the Dutch state to the former Yugoslavia, a letter from the then Premier Lubbers to Slobodan Mitric, testimony by Prof. Rüter, a former president of Amnesty International, about the credibility of Slobodan Mitric, plus a comprehensive CV and an overview of his work as a writer, artist and filmmaker with his wife Iris de Vries, who died under suspicious circumstances in an Amsterdam hospital in 2006.

4. The then mayor of Amsterdam (Job Cohen), the Minister of Immigration and Naturalization (Rita Verdonk), the chief of the Amsterdam Police and the Chief Justice were not only aware of this state liquidation, but allowed the police, who followed the preparations closely, to let the murderer and his team go about their business undisturbed: "Orders from Higher Up!" The Amsterdam village idiot, who had publicly called his pig Allah on television and who had made the film "Submission" with Hirschi Ali had to be sacrificed to abate the fury of the Islamic community at home and abroad in order to prevent worse. This is related in the chapter"  Jewish Bacon Cunt" based on a conversation secretly recorded at the mayor’s residence in Amsterdam by the Dutch secret service. The chapter "Submission," with which this book after the Prologue "On the Java Street There Is Something Going On" starts, and the chapter "Fox" also present a somewhat different perspective on how this film actually came about, while from the chapter "DNA" and the conversation at Cafe Danzig between Theo and the AIVD it turns out that the former had doubts about the true identity of Hirschi Ali and ordered an investigation to determine whether the preparations for the murder were an insider’s case of "estherism" (a term from the vocabulary of counter-intelligence work, in which a criminal prepares a criminal act which he then discloses to the authorities in order to gain a foothold and high position therein).

5. Part of the preparations for the murder of Theo van Gogh was that the "Chosen One" was taught the art of throat-cutting by an Imam and a colleague under the watchful eye of two big bodyguards. First, through the use of a goat as described in the chapter entitled "Islamic Butchery" and then even on a Ukrainian man, as described in the chapter "Body Wrapped in a Carpet" illustrated with a color picture of the crime scene in Amsterdam East. That as well was closely followed by the police, who could have prevented it, but who were told not to intervene: "Orders from Higher Up ...!"

The book of 192 pages with 28 in color is a translation by N. J. from the Serbian original, which appeared in January in Cyrillic under the title ЋОРАВИ СОКАК and in Latin as ĆORAVI Sokak in Mitric’s own publishing house "L'Atelier de la Liberté" in Amsterdam. It contains a foreword "Does a Dead End Street Have an Exit After All?" by the Serbian philologist and writer Prof. Dr. Rade Bozovic, first impressions by the Serbian journalist and writer Dusan Tesic Luzanski and, as an introduction, a press release from the Government of the Republic of Serbia and two press releases by the Willehalm Institute about the panic brought about by two postal packages with seven of Slobodan Mitric’s books, including the Serbian editions of "Dead End Street", which were sent early in February to the prosecutor for war crimes in the Serbian capital Belgrade.

This Serbian-Dutch cultural cooperative ends with a brief history and presentation of the objectives of the publisher: the Willehalm Institute Press Foundation, established in 2005 Amsterdam and named after Willehalm, the 9th century founder of the original House of Orange in southern France, a paladin of Charlemagne, who in 1066 was declared patron saint of the knights, especially for his part as the supreme commander of the Carolingian army in the Spanish Mark in repulsing the march of Islamization at that time in Europe.

Copies of this "intriguing book with sparkling dialogues" (proofreader Ton Majoor) were submitted on February 16 to the national daily newspaper TROUW in Amsterdam for its Police and Justice editor Adri Vermaat (as yet no reaction) and Slobodan Mitric's lawyer Henri Sarolea. The next day, copies were presented to the Queen (personally delivered to her guards stationed at the gate of her Palace Noordeinde in The Hague) and to Geert Wilders (via the mail room at the Parliament Buildings); for him the Preface by the publisher entitled "Can the Current Rise of Islamization Still Be Countered?” might be of special interest and possibly even a welcome opportunity to raise question in the House of Parliament to the government (no reaction as yet). Also that day, three copies were personally presented by the publisher to the parents of Theo van Gogh in their hometown of Wassenaar, who received them with an interest. To them, Slobodan Mitric dedicated the following words in his book:

"I cannot bring your son back alive, but what I can give you is the truth how and why he was murdered, which you can read in this book. I hope that having read it, you will not allow this cover-up to continue."

This is also the message to his readers on the back flap of his book:

"For each murder, no matter whom it concerns, it is necessary to tell the truth and nothing but the truth as well as to write the truth about it, whether one likes it or not. It is up to you, dear reader, to either support or reject this novel. But if we remain silent, the murder machine of the dark forces will continue their killing without any further hindrance: Yesterday Theo, tomorrow one of us. Nobody has the right to kill – irrespective of whether a person really deserves to die under the law of a state or a religious community. Especially in the so-called free democratic world that claims to follow the path of freedom and justice.
Let us help bring all those responsible for the murder of Theo van Gogh to justice."

Interested reviewers can request a (Dutch) copy from the publisher (RJK).
Posted by Willehalm at 3:35 PM