FOREWORD - Does a Dead End Street Have an Exit After All? 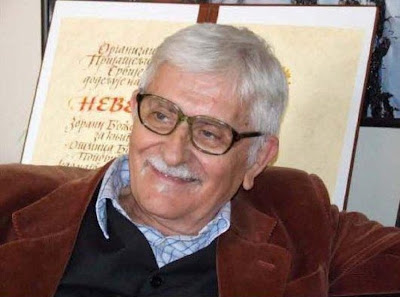 The new novel by Slobodan Radojev Mitric, Dead End Street meets the expectations raised after the release of his second last novel Help! They’ve Kidnapped Me! Lady Di! By means of short, concise dialogues the writer leads the reader through the story. He traps, describes and unravels. The story is clearly and concisely defined. The characters are recognizable by their dialogue, which is often juicy but never banal. Written in pure literary language with here and there the necessary jargon.
Slobodan Radojev Mitric is an experienced writer in a field that I would call the political crime genre. The heroes are mostly fictitious and otherwise, at least their names are such, the location of the events are that only occasionally, while the content always comes from our daily, political and criminal life. In almost all of Mitric’s novels, as is here the case, there is a sophisticated and metaphorical quest for the invisible and chief culprit. The reader is expected to adopt caution and a critical attitude towards the events which the writer describes. Instead of excitement, which police novels usually offer, this one also suggests, like all his other novels, a deceptive hope that whoever reads it, will see the presupposed moral side of the novel, its gentle yet strong message: Wake up people - this takes place in your, our surroundings! So also here in this novel, the terrible and - for a normal person incomprehensible - murder of filmmaker, artist and columnist Тhеo van Gogh. A crime that reminds me of the recent murder of Santa Claus in Tajikistan.
The content of the novel leads us, after the description of the actual events, to think seriously about the presence of more and more radical believers among us, who do not shy away from senseless violence and murder. The world has become a strange place. In some countries, even in the democratic West, they know how to sentence outsiders for a verbal offense, which although pronounced was not implemented, in the East, unfortunately, especially with Muslims, they can therefore not just plain kill you, but even cut your head off. As if there is a difference between these two crimes? Neither of them, not in the West nor in the East, is good, and that is brought in a convincing manner to our attention by this short, fast-moving, sharp and interesting novel with the metaphoric title Dead End Street.

Finally, let me say that in this novel it is not Theo van Gogh, who was murdered, but that it is suicide by the fundamentalists, whom are increasingly to be seen in the political sphere, as if many of them have switched from the religious sphere. This novel urges us to think about whether we have come to the end of a dead end street, or whether, despite everything, there is still a ray of hope. If we would have no hope, we would not live, right? Those reading Dead End Street will, I hope, find an exit. Politicians and clergymen will face a tougher task: they are fond, I am afraid, of dark, narrow and mysterious alleys.

Prof. Dr. Rade Božović was born in Vojvodina in a place that later changed its name, so that a broad section of the population would not get to know who was Pašić (1845 - 1926, Serbian, later Yugoslavian premier). He was an assistant at the university of Belgrade, afterwards professor, distinguished translator, author of some 20 books and member of the Serbian Writers Union.

Posted by Willehalm at 3:02 PM